Posted on November 4, 2016 by janecarterauthor

We are in defense mode. We wear netting hats and cover ourselves with repellent. Lots of repellent. I am surprised we can stand being close to each other. Along with the beautiful water views have come battalions of mosquitoes ducking and weaving, they retreat and reform and attack again. They are fast and persistent.

My father flew mosquitoes in Africa and India in the Second World War. That was a great choice of name for the bomber. When the mosquito finally came into existence in 1940, it was the fastest airplane in the skies. It was made of wood and glued together by a huge team of cabinet makers and carpenters. That was quite clever of Geoffrey de Havilland, whose idea it was, as England  had a lot of men proficient in wood working at that time.

It started with only two crew and bombs. No anti aircraft guns to defend itself. The idea was it could escape attack because it was so fast. Because it was so light it could travel further  than other planes.  I think Mr de Havilland studied the mosquito quite closely.

Outside, where the roses are spectacular,  they are mobbing me. Someone has suggested spraying with Pyrethrum.

1 litre listerine, + 3 cups of epsom salts + 1 bottle of beer. Someone said all I was doing was making them drunk. Hundreds of thousands of them swaying around and slurping blood

Sounds good to me.

Posted on October 14, 2016 by janecarterauthor

Recently seven intrepid New South Wales Corriedale breeders embarked on a tour to have a look at some Victorian Corriedale Studs. We set off amid reports of major flooding and storm warnings. I had never been on a sheep stud tour before and I must say it is something I can thoroughly recommend. The weather was perfect, by the way.

First to Loddon Park, where Shane Baker showed us his sale rams,and some ewes and lambs.. Moving along to Darryl MacDonalds at Porcupine Ridge, Jan, we will never forget those cheesecake tarts and homemade sausage rolls  and I can tell you that a thousand Corriedale ewes and lambs decorating the picturesque hillsides of Porcupine Ridge is a sight to behold.

The second day we were ushered straight in to look at the ewes and lambs, mustered into the yards for us at the Venters, Springdale, near Geelong and a drive round the farm. Morning tea was magnificent, Brenda thank you for the scones, and then on to meet Milton and Charlie Savage for lunch. Milton had a large mob in the shearing shed for us to inspect and we enjoyed the intense and ensuing discussion. Each place was special, to see the flock on their home ground, and how, even though they were barely one hundred kilometers from each other, each flock was individual representing the type their breeders were looking for..there was no holding back, We thank each breeder for being so generous and welcoming. 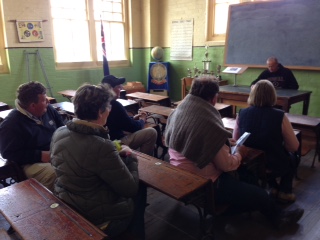 Tour with the Macdonalds 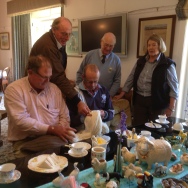 Morning tea with the Venters

At the Deniliquin Peppin Museum, Amanda Kemp discovered a row of Corriedale Flock Books starting at No 1, which was a most interesting start to our trip.  We discovered both the Venters and the MacDonalds had been on their farms for around one hundred and fifty years. Meeting the next generation of breeders was wonderful, Shane Baker and Finn MacDonald and Amanda and lastly,Charlie Savage, were all interesting to talk to. So looking for something different  – I recommend a sheep stud tour, of Corriedales, of course.

Now you may be wondering about the elephants? Jim Venters has them in his garden. We think he may have remembered Corbett’s description of his rams – the size of Shetland Ponies……. Elephants?

Posted on October 5, 2016 by janecarterauthor

There is a lot of water around. These are our back paddocks in a normal time. Now we have water views.  Water levels peak and then steady down and then peak again. It is a learning experience for us but I can’t say I’m not enjoying it. Our water views are pretty spectacular.  Water is weird as it first builds slowly either side of the road and the next time you travel it has spread out some more.Then it is lapping at the edges and now today it is running over the road and cars and trucks are ploughing through it. We are glued to our river reports and livetraffic.com and Elders weather. What happens next, that’s the question. 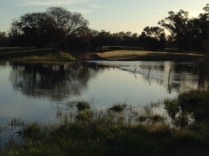 Posted on August 23, 2016 by janecarterauthor

Helene Young and me

Thank you Romance Writers of Australia for the best conference yet.  We were in Adelaide  with seas like chopped onion and huge gusts of wind rattling the windows as I sat entranced listening to the keynote speaker, Keri Arthur.

I met Keri six years ago at my first conference and had no idea she was then a New York Times best selling author. And that was because I didn’t know anything about the industry at that time….On Saturday Keri told us, warts and all, of her trials and tribulations and amazing successes. I felt so honored to be there as she calmly  and succinctly relayed her first contract story and then the ups and downs of living as a published author. It was very inspiring. Keri writes paranormal and urban fantasy, with her most famous heroine being Riley Jensen,  part vampire, part werewolf. This was published in 2006 before vampires had taken their hold on the modern romance genre.

Once again being savvy and professional was reinforced,  as it was the whole weekend, time and time again. It’s hard to describe the excitement of being part of this amazing industry and being friends with this group of women who band together under the banner of romance writers. Very few people are aware of just how big the genre of Romance is in the book industry. Over half of all books printed every year shelter under that umbrella. Romance Writers of Australia is a ‘not for profit’ organisation, that runs this conference solely for the education and furthering the careers of their members. We also meet other writers, publishers and agents. I get such a thrill from looking round the table and recognizing  the names on the name tags. Names you see in bookshops and libraries and K mart and your bookshelves at home.

Oh and we have a very good time.

‘I can drive five hundred miles….

It should read walk but drive fits well. That is such a great song. And maybe it wasn’t exactly five hundred miles but it felt like it. Until I tuned into RN and found myself listening to a show called Radio Tonic.

It kept me going for hours on my trip back from Sydney with the most bizarre story I have ever heard.

Five years ago, Adele Morse, a  student artist at the time, decided to take up taxidermy. So she bought the body of a fox on ebay. A shattered and injured fox body and it was one of her first attempts.  She patched and pasted as best she could and then added human eyes. She then posted a picture of the fox hoping to sell it.  A musical promoter bought it to give to a friend, a musician if he would do a gig for him.  Yes said the musician, yes said the promoter and the gig happened.  But at the same time the picture of the “Stoned Fox’” was going viral in Russia. Totally unbeknownst to Adele, until she started seeing pictures of her fox photo shopped with some famous people around the world. Adele was invited to go to Russia with her fox for a few days.  She had to go back to the promoter and borrow the fox back. He offered to come too. In Russia there was a media frenzy, She was mobbed. The Communist Party, a little alarmed by the movement, organised protests, claiming the owner was a drug dealer, had done the work while ‘he’ was high. It was  huge, Adele was invited to stay for another six weeks but she refused.  Stunned was more like it. Such is the power of the internet. Tshirts, and tons of other items were being sold, and as Adele said, she was making nothing out of all this.

I didn’t see the ‘Fox’until today.  I will now show you  the fox, as he appeared. Adele has gone on to improve her taxidermy skills .

So the time vanished, I’d had a wonderful day at Tara, I hadn’t seen it for many years, and although it had changed, it felt very familiar still. Everyone was very friendly and I would like to thank everyone for all their help  and hope they are enjoying being wrapped in Corriedale.

While in Sydney I saw Vivid. It is totally brilliant.

And this is what I saw when I got home.

Posted on May 8, 2016 by janecarterauthor

I am in trouble. 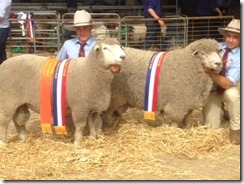 Posted on May 7, 2016 by janecarterauthor

To the four of you, Abbey, Amelia, Bunyip and Bella,  some of our best ewes, we wish you a very happy mother’s day.

Just to fill you in, between them they have produced five  stud sires, eight Grand Champions, three Reserve Champions, and have contributed five  sheep into our show teams, over the years.

Over the last five years they have lambed 175%.

And every year they grow eight kilos of wool.

These Aussie Corriedale girls supply the nation with fibre and food and I have to say seem to enjoy life to the full.  And they’re ready to do it all again in June.