‘I can drive five hundred miles….

It should read walk but drive fits well. That is such a great song. And maybe it wasn’t exactly five hundred miles but it felt like it. Until I tuned into RN and found myself listening to a show called Radio Tonic.

It kept me going for hours on my trip back from Sydney with the most bizarre story I have ever heard.

Five years ago, Adele Morse, a  student artist at the time, decided to take up taxidermy. So she bought the body of a fox on ebay. A shattered and injured fox body and it was one of her first attempts.  She patched and pasted as best she could and then added human eyes. She then posted a picture of the fox hoping to sell it.  A musical promoter bought it to give to a friend, a musician if he would do a gig for him.  Yes said the musician, yes said the promoter and the gig happened.  But at the same time the picture of the “Stoned Fox’” was going viral in Russia. Totally unbeknownst to Adele, until she started seeing pictures of her fox photo shopped with some famous people around the world. Adele was invited to go to Russia with her fox for a few days.  She had to go back to the promoter and borrow the fox back. He offered to come too. In Russia there was a media frenzy, She was mobbed. The Communist Party, a little alarmed by the movement, organised protests, claiming the owner was a drug dealer, had done the work while ‘he’ was high. It was  huge, Adele was invited to stay for another six weeks but she refused.  Stunned was more like it. Such is the power of the internet. Tshirts, and tons of other items were being sold, and as Adele said, she was making nothing out of all this.

I didn’t see the ‘Fox’until today.  I will now show you  the fox, as he appeared. Adele has gone on to improve her taxidermy skills .

So the time vanished, I’d had a wonderful day at Tara, I hadn’t seen it for many years, and although it had changed, it felt very familiar still. Everyone was very friendly and I would like to thank everyone for all their help  and hope they are enjoying being wrapped in Corriedale.

While in Sydney I saw Vivid. It is totally brilliant. 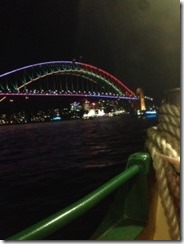 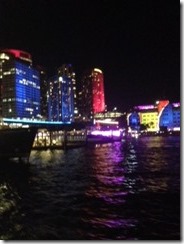 And this is what I saw when I got home.

This entry was posted in Uncategorized. Bookmark the permalink.