We’re off to Dubbo.

If anyone thinks sheep are dumb, think again.  It’s a countdown to Dubbo sheep Show.  Everyone’s on their toes. 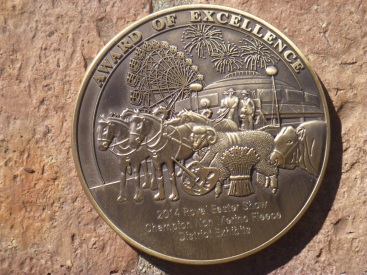 Sydney Medal for Champion Cross Bred Fleece of the show.

Elsworth, who won Reserve Champion in Sydney at Easter hasn’t stopped challenging Errol and Devil since his return from Sydney.  You know what teenage boys are like. Nipping and annoying each other. Not the outright head butts, thank heavens. He is definitely challenging for second place, though

Not Dexter , of course.  He remains the king – indisputably.

So Devil is being entered as a shorn ram.  He is huge. We weighed them  yesterday and he weighed 125 kilos.

Frisco, our ram lamb, has also grown in these last five weeks.

I must also mention that our sheep met Kate and William.  They were commandeered back to Sydney  to be there when William and Kate walked through the sheep pavilion and exchanged some pretty interesting  comments that I am not at liberty to divulge.

Abbey, our crown princess, is looking good.  For Dubbo, our sheep have 11 months wool and will look as impressive as they will get.  We are taking Ewe, our 1 – 2 year old ewe, who will simply not befriend us and Flame, Abbeys daughter, as the ewe lamb.  That’s mostly because we haven’t yet separated Abbey and Flame and are simply not game to do so.

So by next week we will all know the Champions.

I enclose a picture of the medal we won at Sydney for the  Champion Cross bred Fleece in the district Exhibits.  It is a truly beautiful medal.  Thank you Sydney!

This entry was posted in Uncategorized and tagged Champion Cross Bred Fleece. Bookmark the permalink.